(MediaQuire) Why am I here?  Where am I going?  Questions we’ve asked ourselves from time to time.  We’ve explored astrology and  consulted with psychics.  Some of us have even consulted with numerology experts to gain insights into our life’s purpose.  But, what exactly is numerology and how can it help?

Like astrology, numerology can be used as a blueprint for life.  An individual’s birthday and name translate into numbers, which can reveal individual potential and challenges to be experienced.

Much of the spiritual and scientific understanding of numbers is owed to Pythagoras, the father of mathematics. Pythagoras was born around 582 B.C. on the Greek Island of Samoa, in the Aegean Sea.  Pythagoras believed that numbers, on a personal level, represent characteristics, abilities and events. He taught that: “Numbers are the law of the universe.”   Pre-dating Pythagoras is Yogic Numerology, with a vast knowledge base and healing technology.

Recently I had a renewed interest in numerology was  introduced to Yogi Akal, the modern master of  this ancient Yogic Numerology system. Internationally, he is known as The Numerology Professor.

What are the benefits of numerology?

Yogi: I work with Yogic Numerology. It’s a very distinct form. It’s the original Yoga and is considered to be the counseling system of the Yogic arts and sciences – it’s how the prescriptions for healing were formed centuries ago. One would analyze an individual’s birth date to establish the map of their life, to assess the 12 different parts of their mental, physical, emotional, and spiritual anatomy, and to give the best advice for their life and lifestyle. Now besides being used for counseling and health purposes, it’s also being used for business, so owners and managers can plan ahead.

As numerology can determine tips on communication relationship compatibility;  Yogi’s “Love by the Numbers” is explained by delving into the study of two birthdays.  In ancient times, it was exclusively used to set up marriages between elite and royalty. You have utilized numerology to help couples wanting to marry  –  are they still married?

If people are having difficulty in their relationship, they sometimes wonder if they should continue or not continue.  There may be some simple things they can do, based on the timing of the numerological journey or map of their life, to improve the situation.

Can you share an example of numerology and timing as it relates to marriage?

Yogi: I’ll give you an example of a couple who called, and I told them not to get married yet. This was a couple whom  I knew personally.  They called and told me they were getting married. I said, “Wonderful.”  Well, they wanted the numerology of their relationship, of the timing for marriage.  After much persistence, I told them that based on their numerology, they should wait two years.  And, low and behold, they did wait two years, which I thought was great. Their relationship continued, but they didn’t get married until 2 years later.  So much happened during that two year time period; then when they did marry, it was a perfect time for them.  Today, years later, they are still happily married.  I think that is a good example of numerology and timing.

Yogi: I wouldn’t say “predict” destiny, I would say “describe”. In other words, there is no interpretation. The Yogic Numerology clearly outlines life lessons and how to master them. It illuminates individual destiny and purpose and how to achieve it, change it, and surpass it. Yogic Numerology can give you ideas about effective direction and strategy, or various options and directions that you may be interested in and how to make them happen.  It can remind you what may not be your best channel in life.  Numerology is far more than a predictive science.

Any similarities between numerology and astrology?

Yogi:  I wouldn’t say numerology is like astrology.  The Yogic numerology is very different.  It has very little to do with the Western numerology, which I studied as well.  I realized this was much more profound and something people could use in a very different way for their own counseling and their own healing.

Yogi:  That’s a very tricky question and I’ll tell you why.  This is a very hard year for her, and if I were her, I would be doing exactly what’s she’s doing now and not make any decision at all. She has to wait a year.  If she makes a decision now, it would really be disastrous.  If she waits a year, or even two years, it’ll be much better for her.  The problem with having a woman as president in the United States is if she’s part of the system or perceived to be part of the system, she’ll be attacked like everybody else before her.

If she’s perceived to be apart from the system, she’ll heal the country.  Whether she’s aware of this or not, this is what Hillary is trying to determine right now; is this the right time for her to be part of the system, or can she separate herself to create something very unique?

I don’t think she’s decided and not telling anyone; I think she realizes it’s the wrong time to decide. If I were her, I wouldn’t trust another single soul, at least for another year.

If a person has never consulted with a numerologist, what do you suggest they do to find you.. looking for numerology counseling.  How do I go about getting a session with you?

Yogi: Everyone can afford my services as I have a entire section on my website that is entirely free which includes features on how to use numerology to learn about yourself.  But in a private session or series…let’s say a person is having difficulty in their life, one of the approaches they might chose is to work with someone like me, a Yogic Numerology expert. I recommend they add this perspective.  If they are having difficulty, this may open a door.  If a person is not having difficulty, Yogic numerology can give them insight into what is possible, which is done in a personal session or in a group format. You can visit www.yogiakal.com for more information.

Anyone who gives Yogic Numerology a shot will experience something that will either reinforce what they are doing with advice for how to improve, give them a strategy for how to move forward, or perhaps think about something they have never thought about before.

Yogi: There are two things: One – what makes Yogic numerology different from anything else is that it will not only give you an analysis, it will give you techniques that you can do to heal and fulfill your life, your work, your relationships, your Self.  You will get specific, concrete things you can do; that’s what makes this different.  It’s a diagnostic and prescriptive system.

Two – The purpose of life, the purpose of Yoga and the purpose of Yogic Numerology is the enlightenment of the Self.Years ago, Yoga was not how to look pretty in tights.  Rather, it was this whole concept about how to live well and to be fulfilled in your life; physically, mentally, emotionally and spiritually.  That’s what Yogic Numerology represents and takes a step further; the 12 different parts of one’s life that one brings into balance as one analyzes and perfects one’s Self. 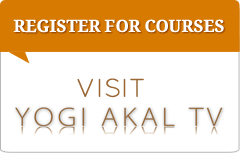 At this point, Yogic Numerology is a new system for many people.  I’m looking for people who want to learn this system to become experts themselves.  Some people are doing this for their own interest because they find it fascinating to look at life this way.  Others want to add it to their career; they may be a teacher or involved in a healing field already, and this gives them another layer to their tool kit. It’s a very comprehensive one or two year program, all online, with students from all walks of life from all over the world.  You can visit www.numerologyprofessor.com for more information.

Thank you Yogi, it’s been wonderful to get a glimpse about Yogic Numerology and how one can apply this system to enhance their lives.

Yogi Akal (also known as Agia Akal Singh Khalsa) is an expert in working with the total being, both personally and professionally. An accomplished Yogi, Sikh minister, social commentator and widely sought after consultant, counsellor and teacher, he is also a dynamic and compelling speaker, having conducted hundreds of programs throughout the United States, Europe, Canada, Latin America, and the Caribbean.Since 1973, Yogi Akal has been teaching people how to achieve optimal health, wellness and success; reaching out and communicating, understanding the world we live in, how the mind, body and spirit connect, and how to achieve one’s potential on the job, at school, or at home. He has a distinguished record with prominent universities, schools, hospitals, mental health facilities, international Yoga organizations, government agencies, and corporations.Yogi is frequently called upon by network media producers and celebrities, political and government figures, business and spiritual leaders, athletes, doctors and educators, as well as everyday people for perspective and strategy. Also well-versed in social commentary and current trends, news entities such as CNN and CNBC have counted on him for valuable insights into the people and events that shape the world and the local community.

Victoria lynn Weston is a professional psychic/intuitive consultant and also known as “the corporate psychic” for 15 years.  She is also a film/video producer whose works include “America’s Victoria, Remembering Victoria Woodhull“ featuring Gloria Steinem and Kate Capshaw. And,“The Intuitive Factor; Genius or Chance“ featuring Gary Zukav and parapsychologist Jeffrey Mishlove. These programs were featured on PBS Television, The Wisdom Channel and Canadian Broadcasts.

Victoria has been a radio host of “Power Predictions” in Atlanta, Georgia and a featured guest on dozens of radio, television shows and print media including; the Atlanta PARADE magazine, The Atlanta Business Journal, ABC Talk Radio; CNBC; BUSINESS WEEK Online; INTERNATIONAL HERALD TRIBUNE, WIRED NEWS and THE NEW YORK TIMES.   VictorialynnWeston.com   She is the President and Founder of  MediaQuire.com and it’s lifestyle blog VenusMuse.com