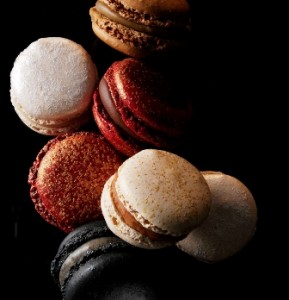 (MediaQuire) Pierre Hermé recipe from his book MACARONS tested by Victoria lynn Weston. “I love French Macarons and have been creating a variety of recipes for a couple of years now. My favorite recipes and method I use are from famed French pastry chef Pierre Hermé.  Chef Pierre Hermé is most often credited with broadening the macaron’s horizons.  Fans of his macarons line the street to get inside his boutiques which showcase a roster of limited-edition flavors, including unique savory-sweet combinations as Osetra caviar and Tango (raspberry, red pepper and Parmesan).

Today, I’m sharing  his “Aceto Balsamico Tradizionale di Modena,” recipe.  Enjoy!  And, if you haven’t yet acquired his cook, MACARONS, it’s a must for every cook’s library.

The Wall Street Journal recently posted, “Macaron-making is an art form, maddeningly unforgiving, but thrilling when mastered. My recipe of choice is one of Pierre Hermé’s, and it’s the perfect introduction to the wave of savory macarons. Don’t skimp on the balsamic; it needs to be wax-sealed, labeled “Aceto Balsamico Tradizionale di Modena,” and aged for 12-25 years; others are simply too harsh for this delicate recipe. Try pairing them with fresh strawberries, and experience firsthand just how far these cookies have come from their comparatively-blander beginnings.”

1. Sift the powdered sugar and ground almonds together. Chop up the cacao paste and melt it at 50ºC in a bowl over a pan of barely simmering water. Stir the food coloring into the first portion of liquefied egg whites. Pour them over the almond-sugar mixture, but don’t stir.

2. Bring the water and sugar to boil at 118ºC. When the syrup reaches 115ºC, start whisking the second portion of liquefied egg whites to soft peaks. When the sugar reaches 118ºC, pour it over the egg whites. Whisk and allow the meringue to cool down to 50ºC. Fold into the almond-sugar mixture.

3. Spoon the batter into a piping bag with a plain nozzle. Pipe rounds of batter about 3.5 cm in diameter, spacing them 2 cm apart on a baking tray lined with baking parchment. Rap the trays on the work surface covered with a kitchen cloth. Leave to stand for at least 30 minutes, until a skin forms on the shells.

4. Preheat the fan oven to 280 F (180ºC)  and then put the trays in. Bake for 12 minutes, quickly opening and shutting the oven door twice during cooking time. Out of the oven, glide the shells onto the work surface.

5. For the ganache, chop up the chocolate and melt it in a bowl over a pan of barely simmering water. Bring the cream to the boil. Pour it over the chopped chocolate. Add the balsamic vinegar and blend for 2 minutes with a hand blender.

6. Pour the ganache into a gratin dish. Press plastic wrap over the surface of the ganache and set aside in the refrigerator for it to thicken.

7. Spoon the ganache into a piping bag with a plain nozzle. Pipe a generous mound of the ganache onto half the shells, then top with the remaining shells.

8. Store the macarons for 24 hours in the fridge. Bring them out two hours before serving.

*Egg whites will liquefy after sitting in the refrigerator for several days, preferably a week. During that time, the egg whites lose their elasticity, the albumin breaks down and they will be much easier to whisk to soft peaks without the risk of turning grainy.